Brussels, the capital of Belgium and home of the European Union headquarters. While the Eurostar dipped and turned, I thought about what the city might have to offer and questioned whether I’d done enough research before arriving. I only had a day and a half to experience a whole new city that would serve as my understanding of an entire country until I have the opportunity to explore a new city in Belgium. 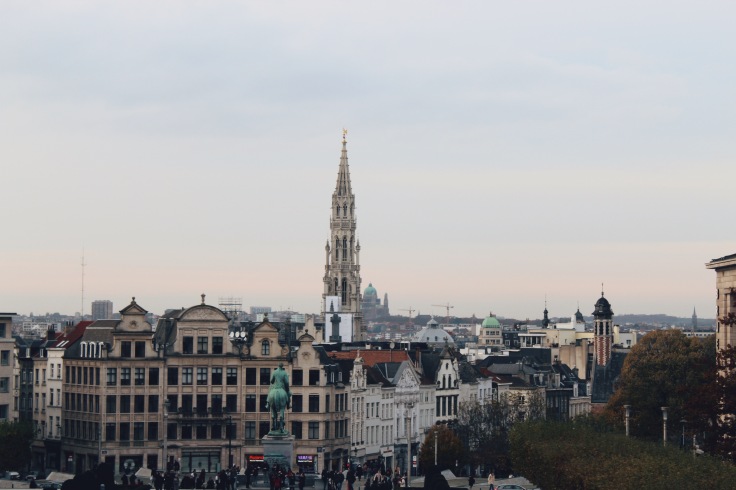 I read “At Home in the World” by Tsh Oxenreider during my travels this weekend. If you’re looking for a Eurostar/plane read, this is a great one. It will inspire you to see the world with fresh eyes and remind you that wanderlust never truly disappears.

Brussels Midi/Zudi station required some patience as I searched for a metro station. My eyes are adjusted to London, looking for the underground symbol instead of an M. When I finally reached the woman selling tickets, she shoveled a ticket for 2.10 under the window and told me that I’d have to transfer and to pay attention. It was an easy transfer and ride. The metro was nearly empty compared to a London or DC train, making me wonder whether the area I’d chosen a hotel in was quiet or if that was a norm for a metro line in Brussels. I opted for the latter because my hotel was positioned just a block from the EU Headquarters.

“It’s cold.” Left my mouth before I was able to register that I wasn’t talking to anyone. I hugged my jacket closer to me and stared through the fog. The glass buildings that surrounded me seemed dreamy and grey through the thick layer of bone chilling moisture in the air. Thank goodness I’d thought to bring gloves and a scarf with me. I pulled my hair out of its braid, hoping that the tangle of hair would offer a little more warmth to my ears.

I walked along the quiet street, wondering why cafes were closed at 11 am. The hotel stood between a convenience store and another hotel. They all seemed to compete for grand attention, most likely working to welcome the same types of businessmen during the workweek. Cristelle, a good friend from Austin, stood behind the rotating glass door waving.

After our introduction and handing off our backpacks to the front desk, we tucked into a health food cafe for some early lunch. My stomach gargled at me, angry that I’d been in three different countries today and hadn’t yet fed it more than a latte in the train station. Le Botaniste was the perfect lunch to warm me up with its warm green curry sauce over brown rice and carrot soup. My insides defrosted and so did my initial impression of the city. I was ready to explore.

We decided to explore the area a bit, heading toward the park and whatever was on the opposite side of it. Cinquantenaire is a huge park, housing the Art and History Museum, Royal Museum of the Armed Forces, Royal Army and Military History Museum, Autoworld, and a huge amount of green space for residents to run around or entertain kids in. While walking through the fall-colored space, I observed that Brussels is much more residential than the other cities I’ve seen in the past few months. Parking meters next to empty spaces littered the streets and runners dotted the track that lines the park. 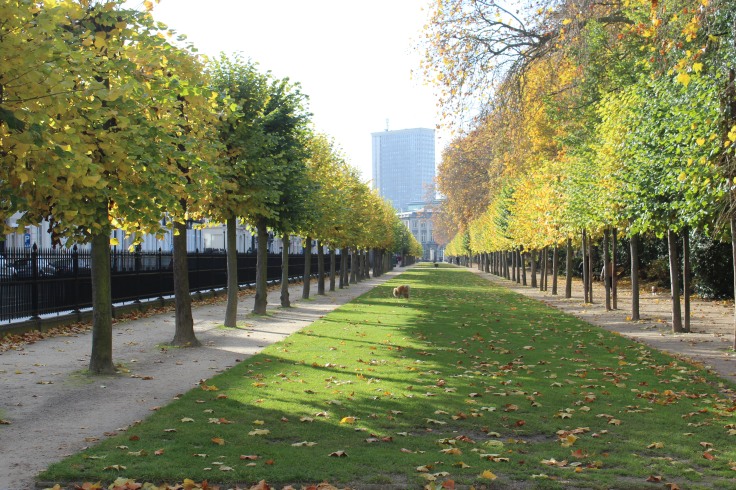 The homes were beautiful. It had an H Street in Washington DC type of feel with all of its beautiful color and residential homeyness. The streets made me crave a fireplace and warm coffee in front of a Christmas tree with my family.

After exploration of the neighborhood behind the park, we headed down toward the center of the city and ate some waffles and fries for dinner because “when in Belgium.”

Never could I have imagined that I’d be standing in the Grand-Place of Brussels, eating a waffle full of half melted sugar and watching as horse drawn carriages saunter past. The public plaza is a wonder to marvel at until your fingers can no longer stand being in the cold. 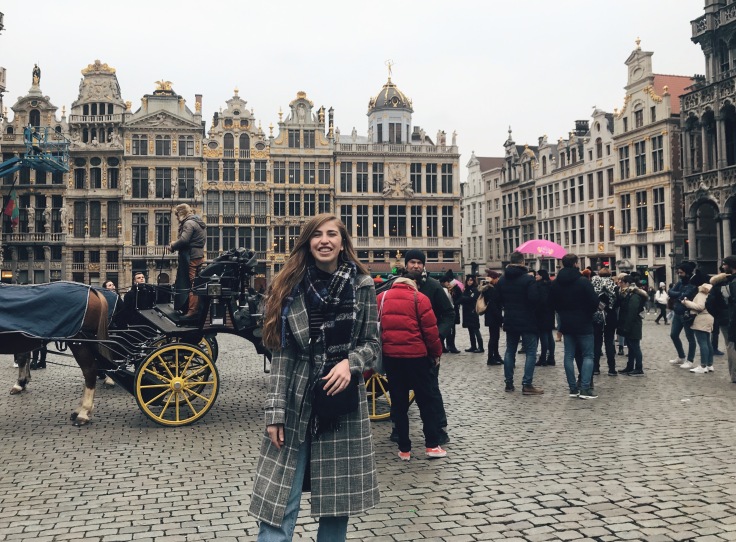 Our night ended early, even for me. But, the cold took it out of us and we had a big day coming up. So, I was tucked in and sleeping by 9. It had already been dark for four and a half hours, and little did I know it would be dark until 7:30 the next morning.

I woke with the only craving I have that’s stronger than that for peanut butter: Coffee. I padded through our cold hotel room, pulled on a jacket and headed for a cafe. Skip to 3 miles of wandering deserted streets later, I was still running on no caffeine and no one I’d spoken to spoke enough English to point me in the direction of a local coffee shop. Google got the best of me and led me through the park to the area we’d been yesterday, I found myself sitting at a Le Pain Quotidien and sipping on a watered down almond milk latte.

I walked for a few more blocks, eager to explore the neighborhood more thoroughly than we had the day before. I stumbled on a coffee shop called L’Artisanal. With coffee beans from around the world, it seemed to be the perfect place to soak up a bit of the Brussels feel. I’ve never been so grateful for the curious intuition. When I asked for an americano the man behind the counter immediately switched from French to English and smiled at me.

“Strong or regular?” Was the only question he asked.
“Strong, and for here?” I asked.
“Ah, it’s morning.” he laughed and motioned for me to take a seat at the communal table sitting in the middle of the small shop.

I sat across from a couple who smiled at me and continued to whisper to each other in that beautiful language that I love so much and cannot yet comprehend. He brought my americano with a piece of chocolate and a smile. One sip of the warm liquid and I was in love, wishing I could visit this shop every morning.

The man came back, carrying three shot classes full of steaming white liquid. He placed it in front of each of us and smiles.
“It’s white tea with apple and cinnamon,” he explained.

I took a sip and my mouth buzzed with the smooth taste.

“Mmmm.” The woman across from me closed her eyes in appreciation then looked up at me, “like Christmas time.”

Cristelle texted me soon after, waking from the happy daze I’d been in while sitting in this shop. If I had one more day, I would’ve spent the entirety of it here. I got a cappuccino to go, letting the expert decide how it was made. My future self was so grateful for that decision as I walked through the chilly park.

From the hotel we wove ourselves to the Cathedral of St. Michael and St. Gudula where we listened to a woman’s violin fill the entirety of the stained-glass covered cathedral with angelic music.

We moved on quickly, recognizing that half our day was almost gone. Our next stop was the Galerie de la Reine. It had a glass ceiling and lines of coffee shops, bakeries and chocolate shops all adorned with Christmas lights. We zigzagged through, trying chocolate from all the different shops. I stopped just outside in the square for another waffle. We wove down the streets, accepting that most of the day would consist of exploring local shops and getting lost in beautiful side streets.

Our day ended near a cluster of museums by the Place Royale-Koningsplein. Here, we watched the sunset over Brussels and a man playing Billie Eilish on a saxophone in front of the view. He rounded off the day perfectly, making me ask how it’s possible to fall in love with so many different cities in such little time.

The next morning I would be sucked into my seat on the Eurostar, wizzing back to my home in London.